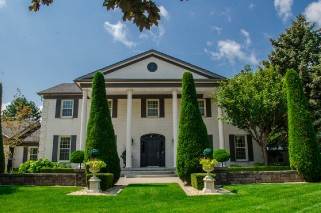 This spectacular property in prestigious Berkshire Estates has many incredible features rarely found in the area. Fully finished from top-to-bottom, this luxurious home offers five bedrooms, five bathrooms, a two car garage with a workshop area. It boasts an absolutely gorgeous new conservatory with floor-to-ceiling windows, large living-room and striking eat-in gourmet kitchen with adjoining formal dining-room. The master bedroom retreat includes a spa-like ensuite oasis. The finished lower level features a games-room, sound-proof music room, dedicated workout room, office, and second kitchen. The manicured grounds overlook a heated in-ground pool, built in hot tub, covered interlocking patio and has been professionally landscaped to offer privacy, beauty and easy maintenance. This elegant home has so much more for the discerning buyer and their family to appreciate. Call on it today, qualified buyers only please. 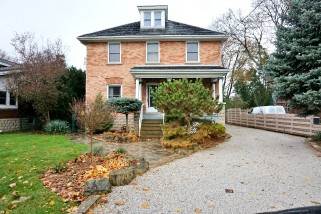 Prime location for this turn of century home situated on quiet mature setting nestled on an enormous 57 x 233 professionally landscaped lot. This home is beautifully decorated and exudes charm and elegance. The many features include 4 spacious bedrooms with hardwood flooring, modern baths, a superb and spacious oak kitchen, formal dining room, living room with gas fireplace, family room with gas fireplace plus finished walk-out basement area leading to one of two outdoor decks where you can relax and admire the comfort of your private backyard. If you like old, but would like it as new, you`ll love every detail this home has to offer. Call today to arrange for your personal viewing!

Residential sales activity recorded through the MLS® System of the Chatham-Kent Association of REALTORS® numbered 76 units in February 2018, down 29.6% from the all-time February record one year ago. February 2018 sales stood broadly in line with the 10-year average for that month. On a year-to-date basis home sales totalled 126 units over the first two months of the year. This was a decrease of 27.2% from the same period in 2017.

“The volatility of the market over the last year is making historical comparisons tricky at the moment, but the important takeaway on the February data is that sales were up from a quiet month of January,” said Steve Carroll, President of the Chatham-Kent Association of REALTORS®. “The improvement in sales coincided with a rebound in new listings, suggesting the January slowdown could have been as much a supply story as a demand story.” The average price of homes sold in February 2018 was $179,314, virtually unchanged from February 2017. The year-to-date average price rose 2.7% from January and February 2017 to reach $180,504.